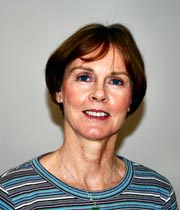 Adele (Del) first became interested in Tai Chi after seeing Master Peng perform the International 8 Forms in 1998. She was immediately attracted to the graceful, coordinated movements of tai chi.

In 2000 she began a beginner’s class with Master Peng, taking a weekly class on and off for several years. It wasn’t until January 2008 that she began to study under Master Peng in earnest; learning 8, 16, 24, 48 forms and Taiji Qigong, 30 fans; 30 and 42 swords; Tai Chi Hockey Stick, 49 Chen style sword and Chen Style Old Frame One.

She has experience in teaching 8 and 24 forms, 30 fan and Taiji Hockey Stick.
In June 2011 Adele became certified to teach Taiji Qigong: Six Forms for Health and in August completed the 32 Sword, 8 Forms, 24 Forms and 48 Forms Taijiquan Workshops with Master Wu Zengle and Master Li Defang.

Del served on the Board of Directors as Treasurer from 2009 until 2016. She remains active in the business of the Board, volunteering for various projects and attending  the monthly Board meetings.

She currently is teaching beginners 8,16 and 24 forms at the Academy.