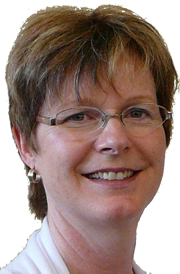 Johanne volunteered her time practicing Latin dance with a group in 2006 and 2007 while working as a dental hygienist for nearly 25 years; she also was fascinated with Tai Chi since she could remember.

She met Peng You for the first time at his workshop at “55 plus” Centre during her placement while studying in Physiotherapy Assistant Program in 2008-2010 and bought the video “Six Forms for Health” and practiced daily Qi Gong exercises. The neck pain was an issue and practicing Tai Chi even for a short time, really improved her quality of life!

December 2012, Johanne took the Qi Gong “Six Forms for Health” Instructor course with Peng You. Johanne learned the International 8 forms and currently working on the 24 forms.

At Tai Chi & Friends of Marathon, she teaches “Six Forms for Health” in the community and soon with the local seniors club.

Practicing Taiji at home with a video is fun but it’s great doing Qi Gong and Taiji as part of a group; the energy generated in a group is amazing! You can “see” it in people’s eyes!

Johanne made priority on her agenda to promote “Six forms for Health” for anyone, any fitness level!