Unfortunately, despite all the amazing efforts of Master Peng, Wushu Canada decided to cancel Thunder Bay’s accepted bid for the 2024 World Taiji Championships.
Master Peng had spent much time, energy and money to succeed in getting the bid.
Many thanks to him for all that he did!!!

The Dec 4  2022 Tai Chi Christmas Drop-in at the Academy was a hit with around 50 people participating.
Thanks to the Association Executive for their efforts.
Perhaps next year a normal Christmas party will be possible.

The National Martial Arts Championships that came to Thunder Bay at the end of July 2022 was a resounding success!
For more details go to the History of Peng You Taiji in Thunder Bay page: Events

WORLD TAIJI DAY & ANNUAL GENERAL MEETING
Sat., Apr 30 – The weather cooperated and about 40 participants joined in for Taiji at the Park.
This was followed by the first Annual General Meeting in 2 years at the Academy.
Welcome to our two new Executive members:
Bev Cadene & Kathy Dutchak
And sad farewell to Susan Vanderwal, our very own Lappe Sword Lady!
Thanks Susan, for many years of hard work and enthusiasm!

Our longtime Chairman Wayne Bilbrough is set to receive some well deserved recognition (Thank-you Betty Anne Nurse for all your work in putting this together!):
The Peng You Taiji Quan Association is pleased to announce to the membership that Wayne Bilbrough is the recipient of City of Thunder Bay’s ‘Citizen of Exceptional Achievement Award’. Wayne is to receive  the “Spirit of Thunder Bay’ which is the City’s highest award for volunteerism. This award honours and recognizes Wayne who has for over 45 years, volunteered his time and efforts to improve and enrich our community, promote Taiji and the Association.
(Due to the pandemic, the city has chosen to combine years 2020 – 2022 award presentations on June 28th VIRTUALLY. Viewing details are provided below).
Wayne has enriched our Association in many ways:
Wayne has shown exceptional leadership and meaningful volunteer contribution within and for the Association. He has always promoted Taiji while taking on various roles and tasks including Executive Committee Chairperson. He has provided extraordinary leadership during many of our Association events including the 2006 Taiji International Forum. He has contributed significantly to the process of building the ‘International Taiji Park’ at the Marina.  His other volunteer duties included meeting organization, maintaining membership information and managing special projects including the annual ‘Association’s Christmas Party’. Most recently, he organized and designed our annual project for membership Christmas Cards.
Other organizations that Wayne was and continues to be involved in as a dedicated volunteer:
Soccer: Wayne played an integral role (1975 – 2012) in developing recreational and competitive youth soccer and contributing to the successful evolution of soccer in Thunder Bay. He started Volunteer Pool Soccer Club with mini-soccer when soccer was only played at the competitive level with a limited number of teams. He was involved with the club from its inception until they decided to cease. At one time there were 2000 children playing in the club. He held the role of coach, President and served in various administrative positions. In the past he held positions on the Youth Soccer League including President, and on the executive, including President, of Soccer Northwest.
Carvers: Since 2010 Wayne continues to volunteer as a member of the Thunder Bay Carvers. He has held the positions of President, Treasurer, event / demo organizer and promoter of the club’s work. He is and continues to be involved with the ‘Save Our Carousel’ project at Chippewa Park.
We are most fortunate to have Wayne as a valuable and contributing volunteer and member of the Association. Congratulations to Wayne on receiving this well deserved Award!
The City’s 45th annual award presentations are to taken place virtually (TV) on TUESDAY JUNE 28 @ 6:30 PM.
This event will be broadcast & viewed through 3 sources….
Shaw Spotlight Channel 10, TBay Tel Digital TV Channel 110 & City of Thunder Bay Website, City Council page at www.thunderbay.ca/watch.council.
2021 Taiji Christmas gathering…
A description of the event from Assoc Chairman Wayne Bilbrough:
We have not been able to meet as a Tai Chi community for over 2 years. Although last year’s “Christmas meal” was great, it did not allow us to be together.  If we can’t meet indoors, we decided to have an outdoor meeting where it was easy to do social distancing. We did Tai Chi in the park. We planned it for the first weekend in December just as we did for our Christmas dinners. However we had an unexpected storm that delayed it until December 12. A beautiful sunny day. There were over 20 people attending in spite of the chilly air. They had a good time and members did and watched Tai Chi for over an hour. There were lots of treats available. Lets hope we can be back to our usual Christmas dinner next year, but this was a lot of fun and a chance to meet. 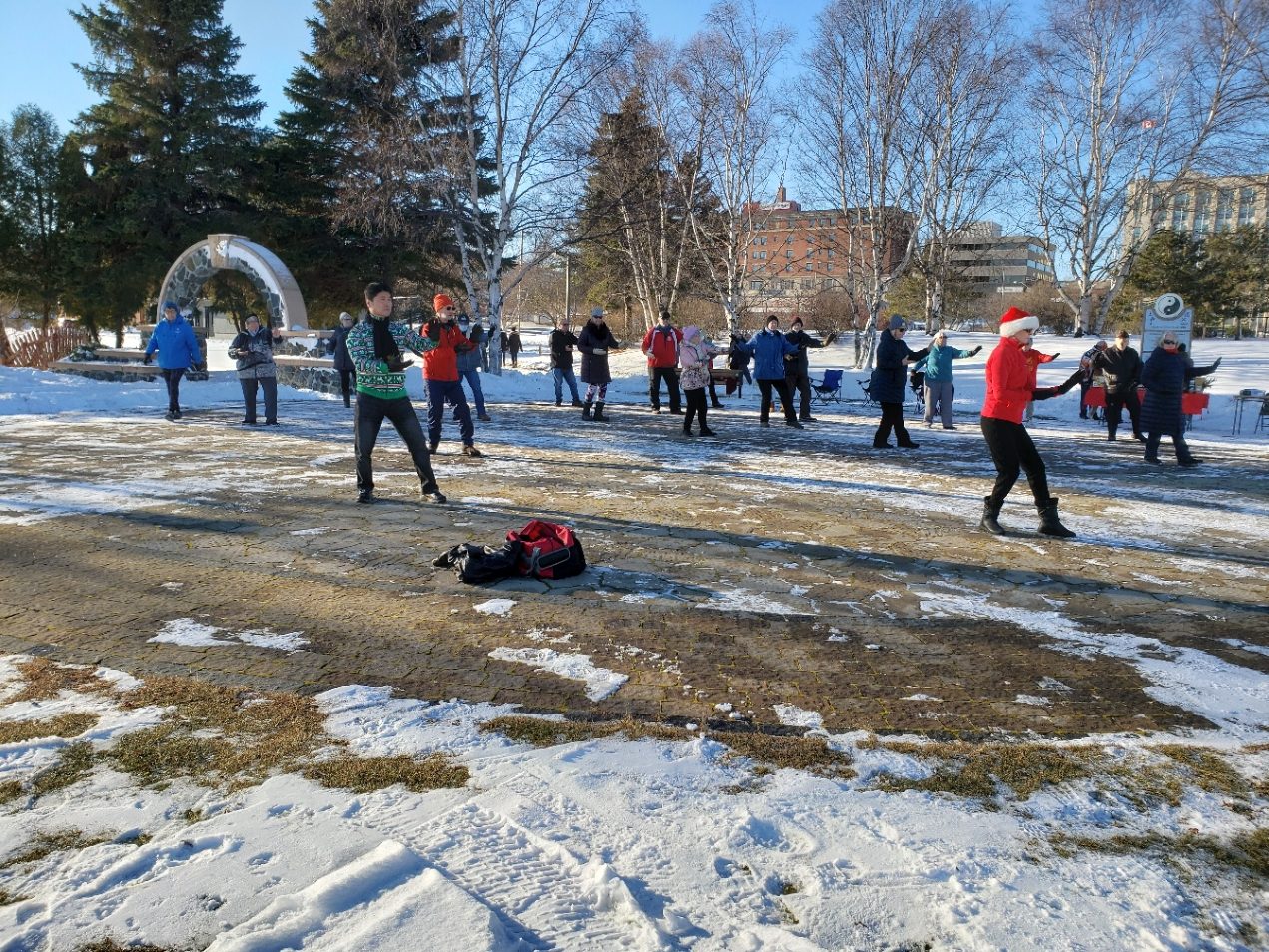 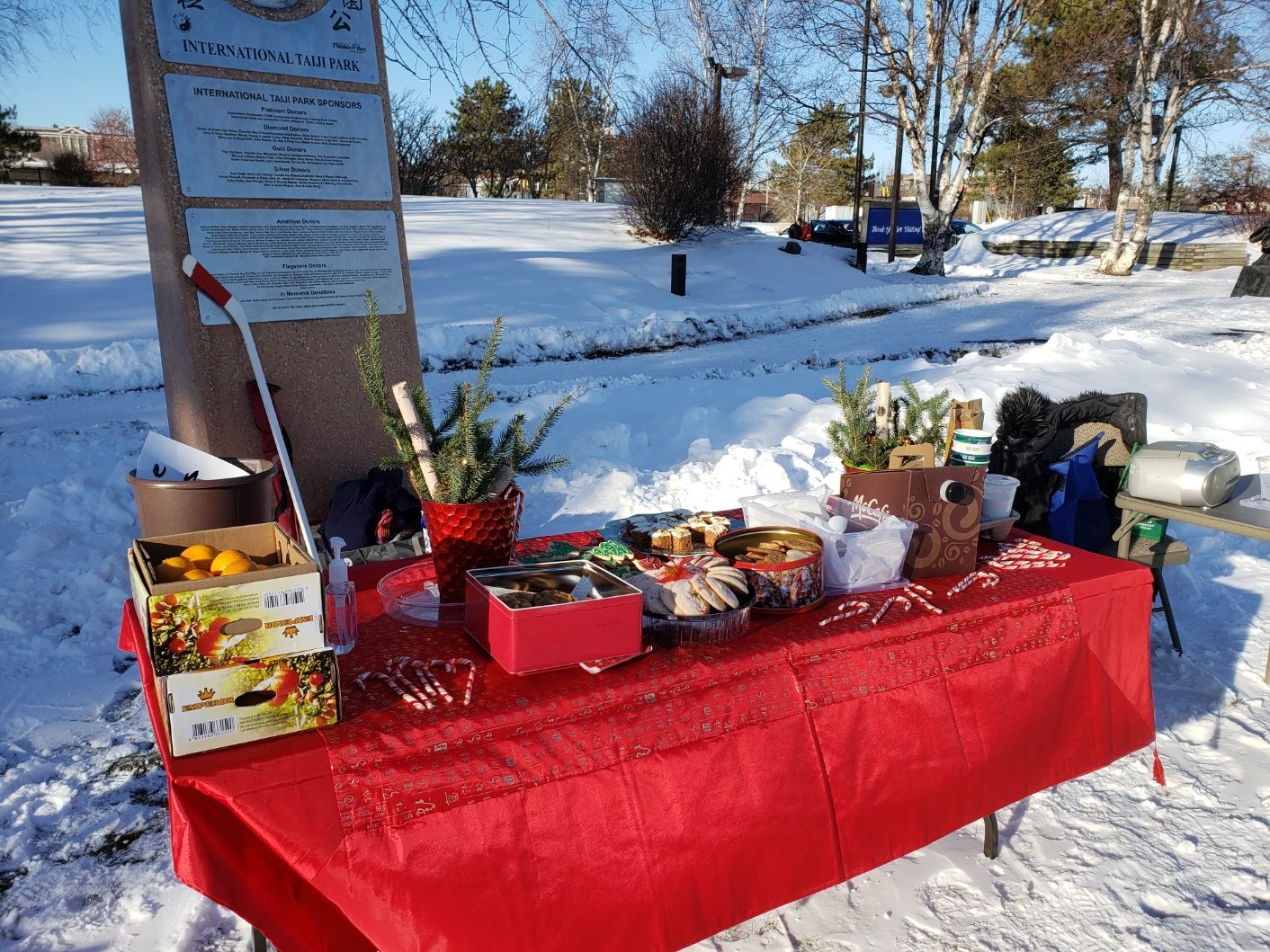 Summer 2021thankfully saw the successful return of Tai Chi in the Park with Master Peng. 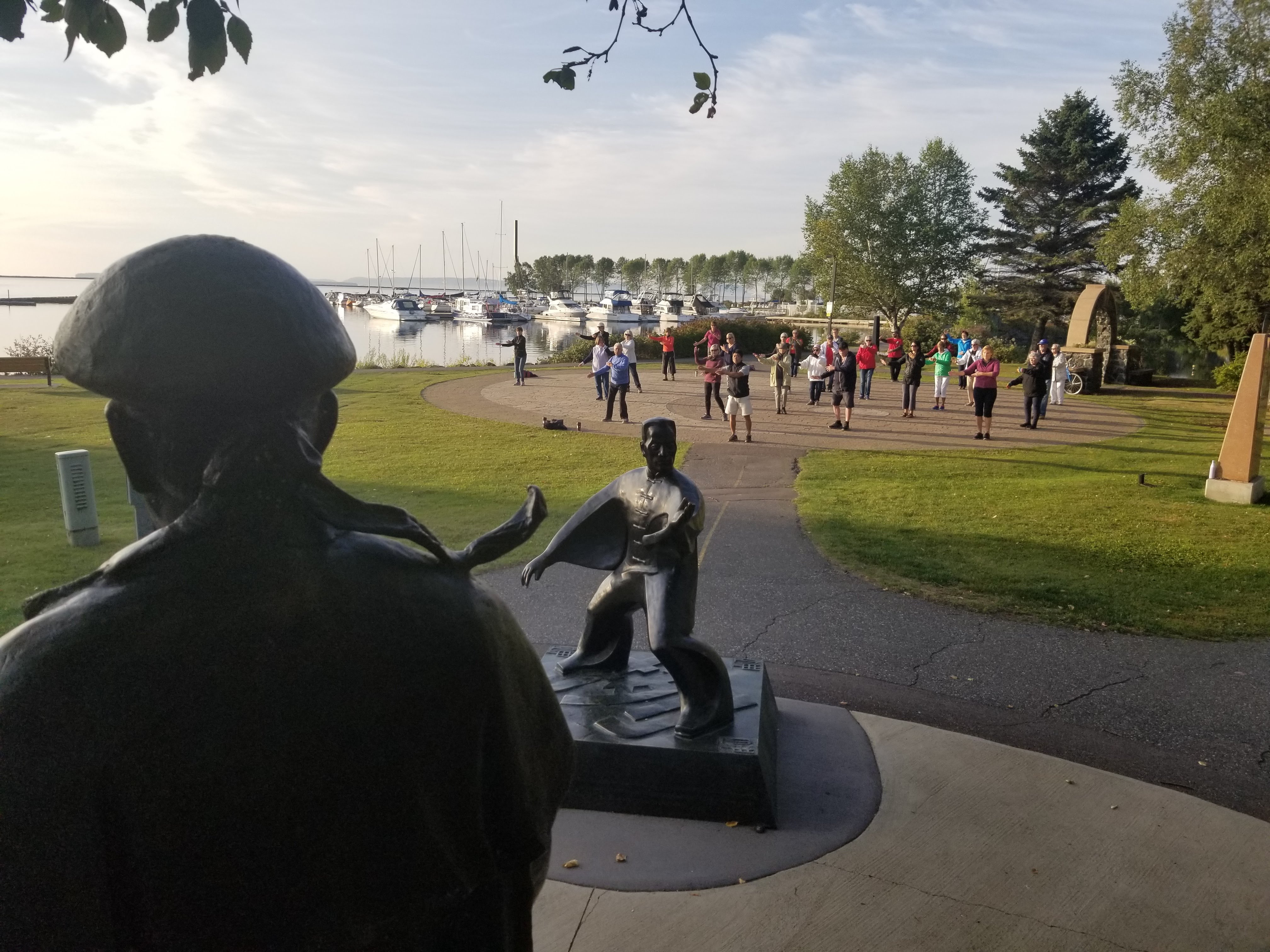 *Being unable to have our traditional Christmas Party the first Christmas Take-out Dinner from the Taichi Chef was held on Sun., Dec 20. The amazing Chinese food was ordered in advance and picked up via drive-by at the Academy.
(See Nov 2020 Taiji Post in Main Menu)

Because of the generosity of our Taiji community $1000 was raised ($500 was the goal) for The Underground Gym! 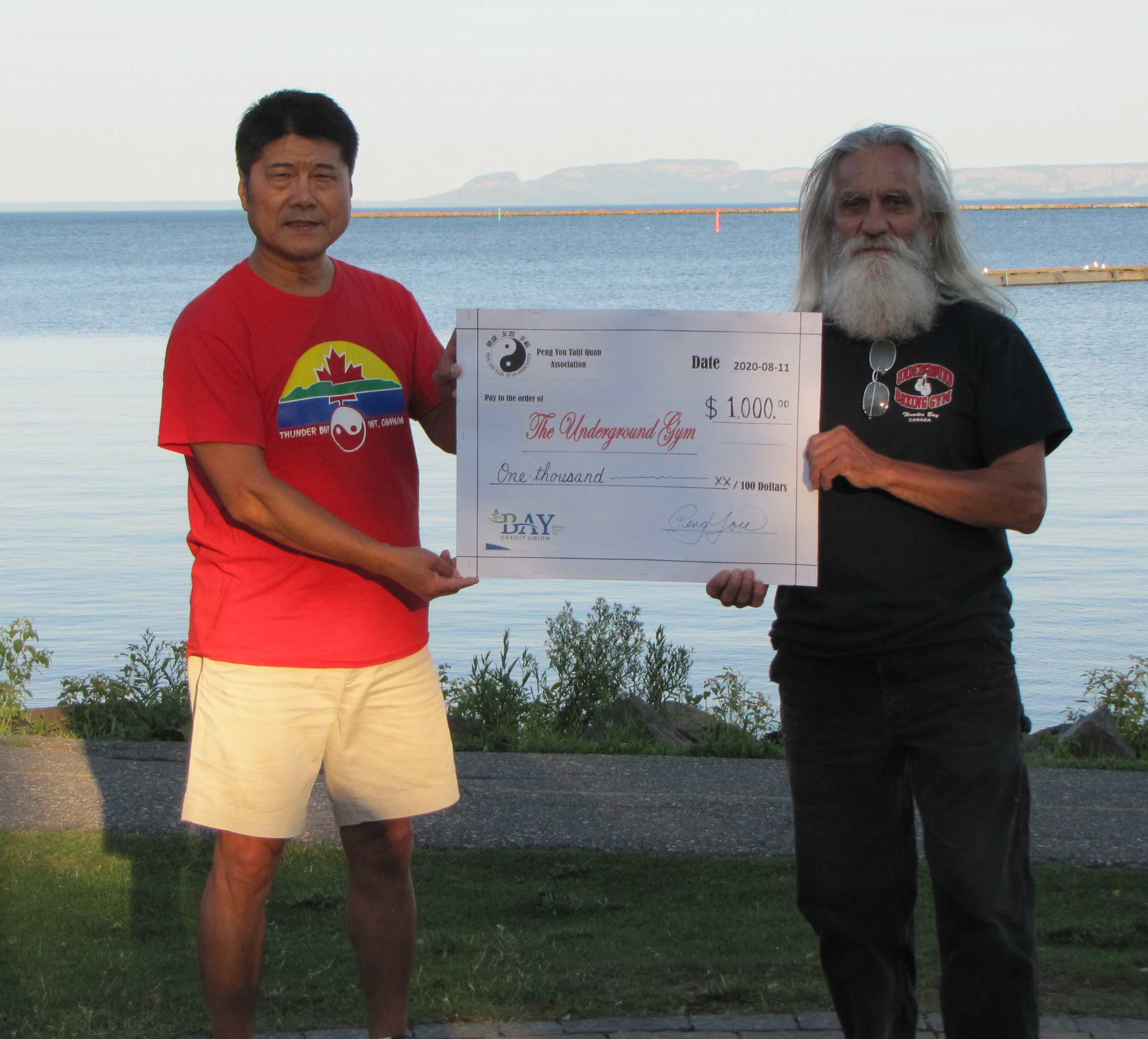 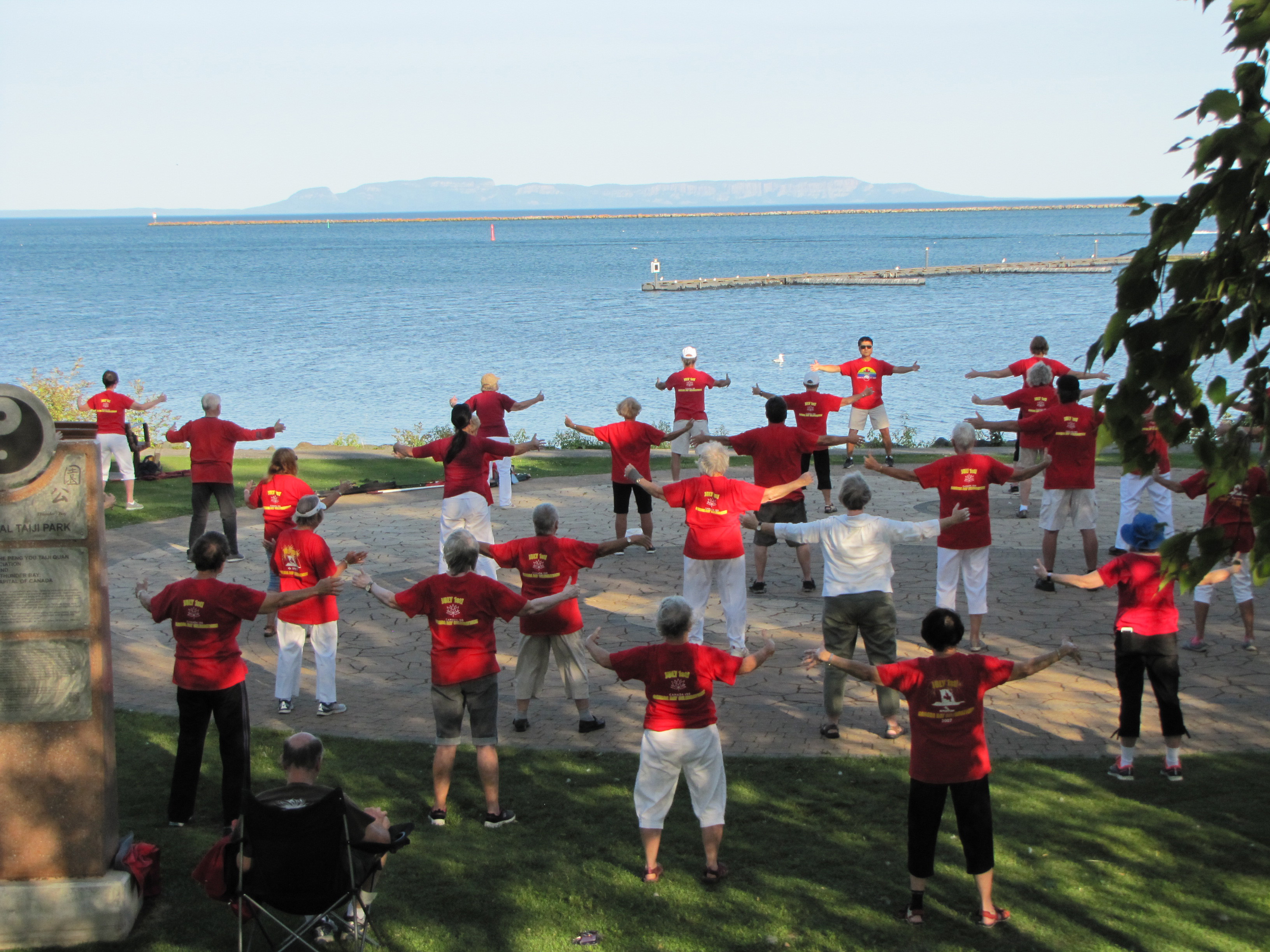 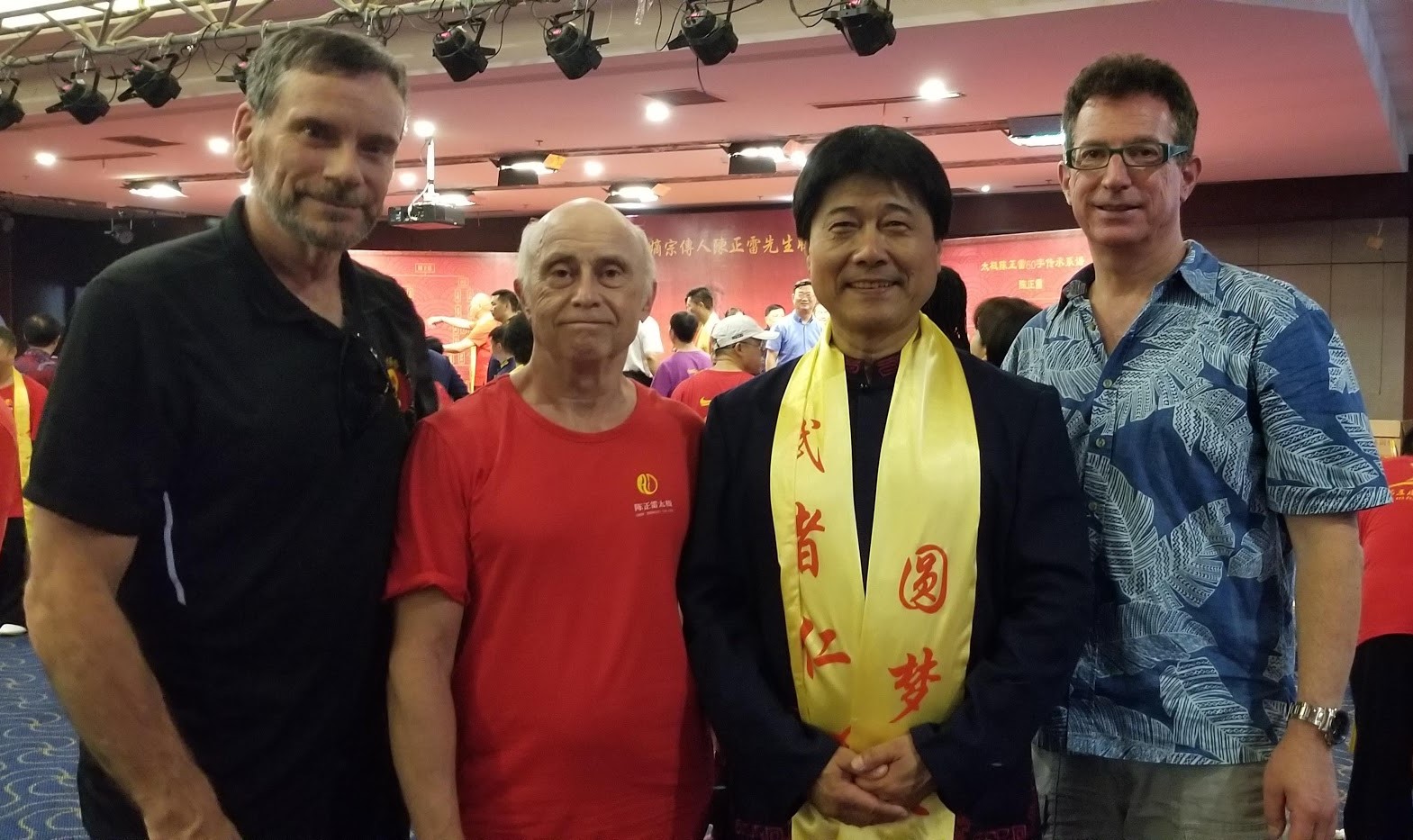 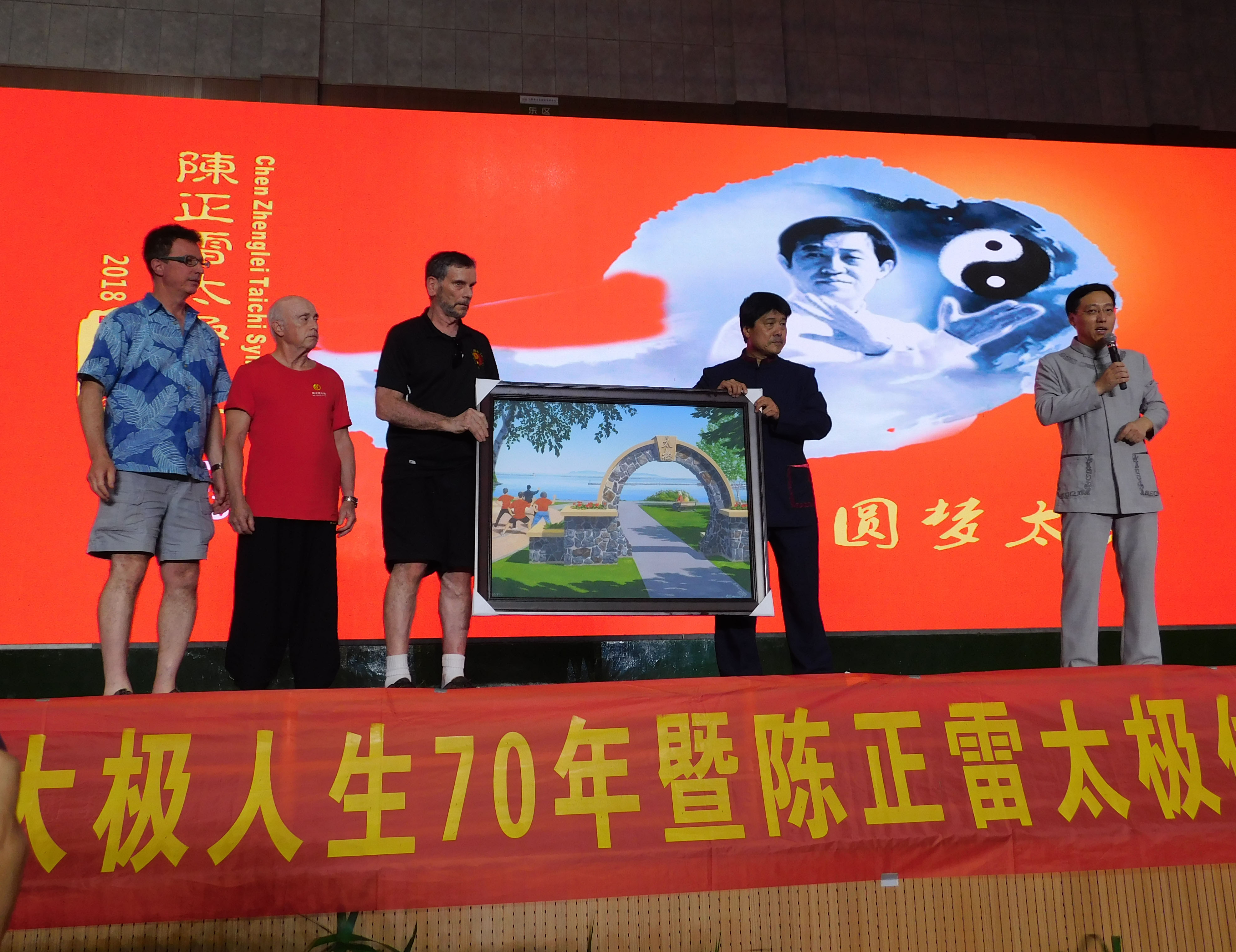 for the statues from Jiaozuo City on Monday, May 21/19 at 11:00 am with the delegation from Jiaozuo! 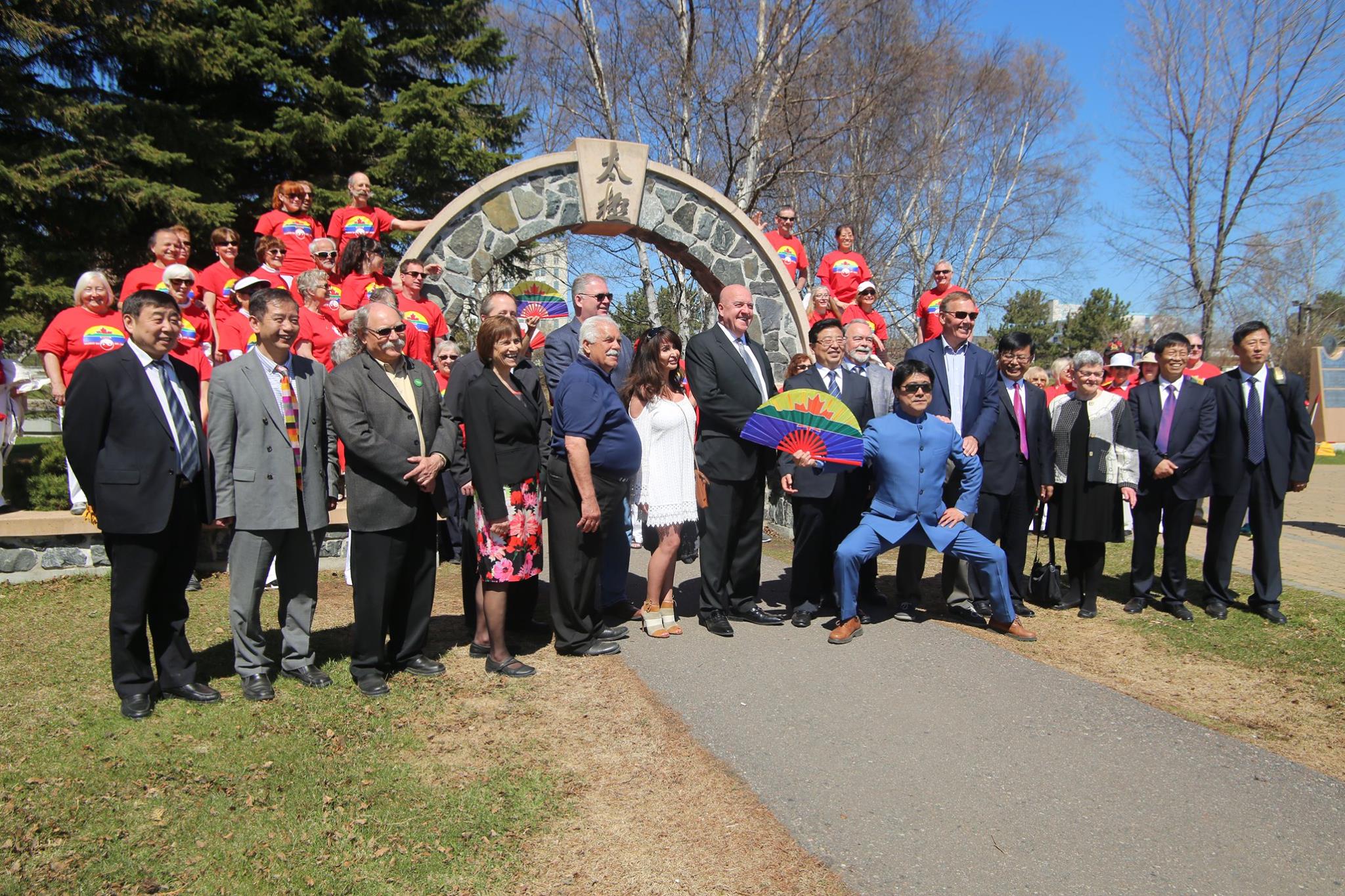 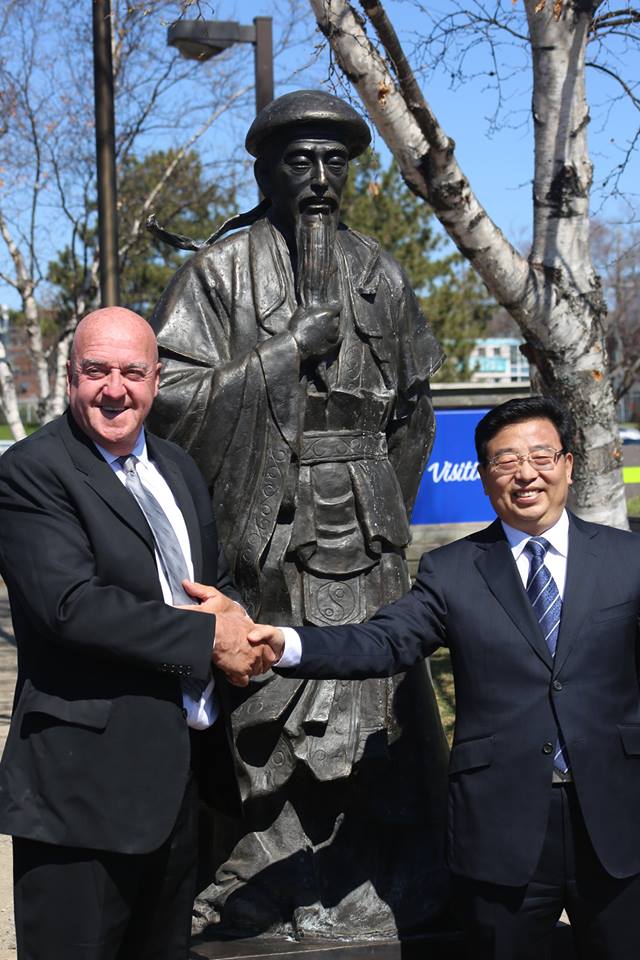 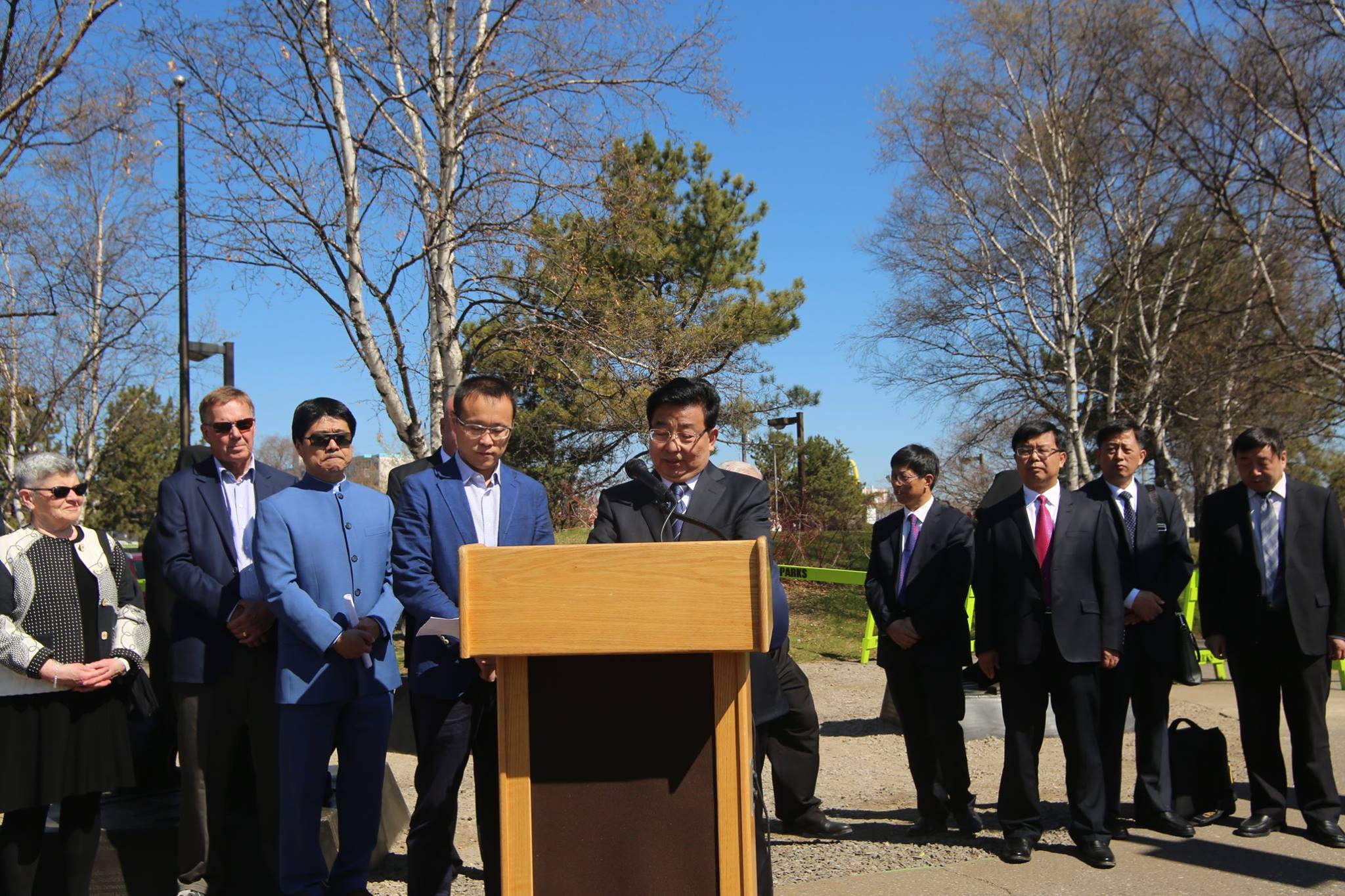 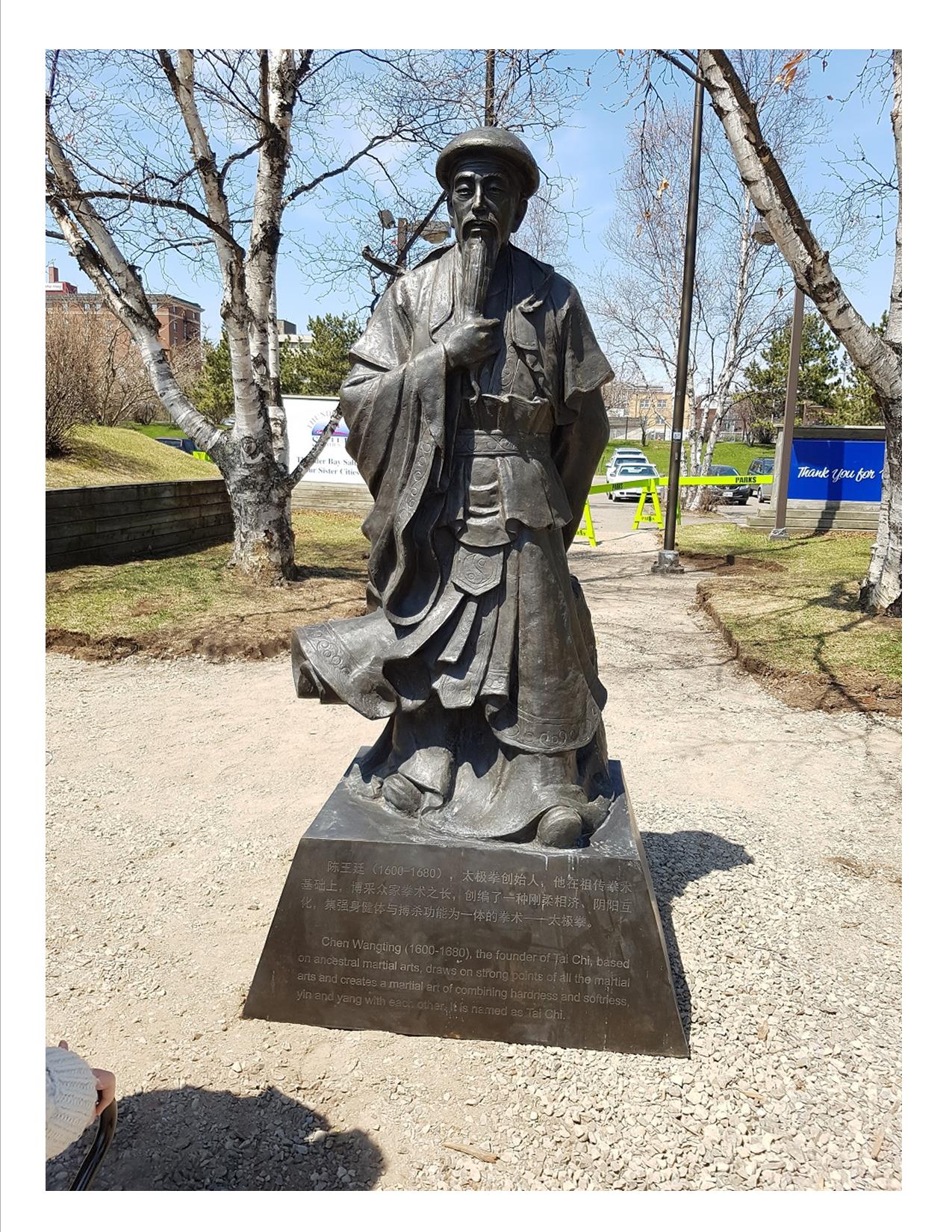 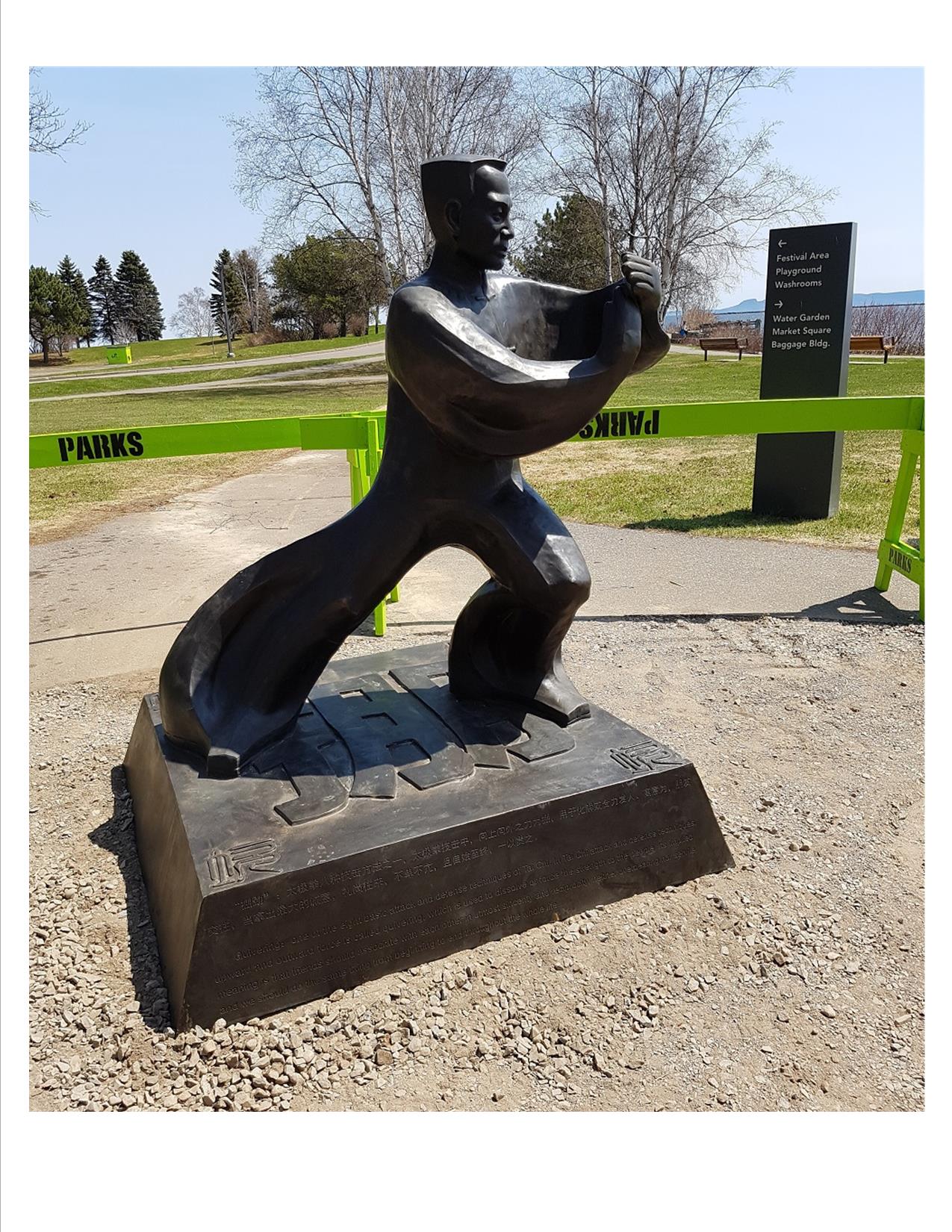 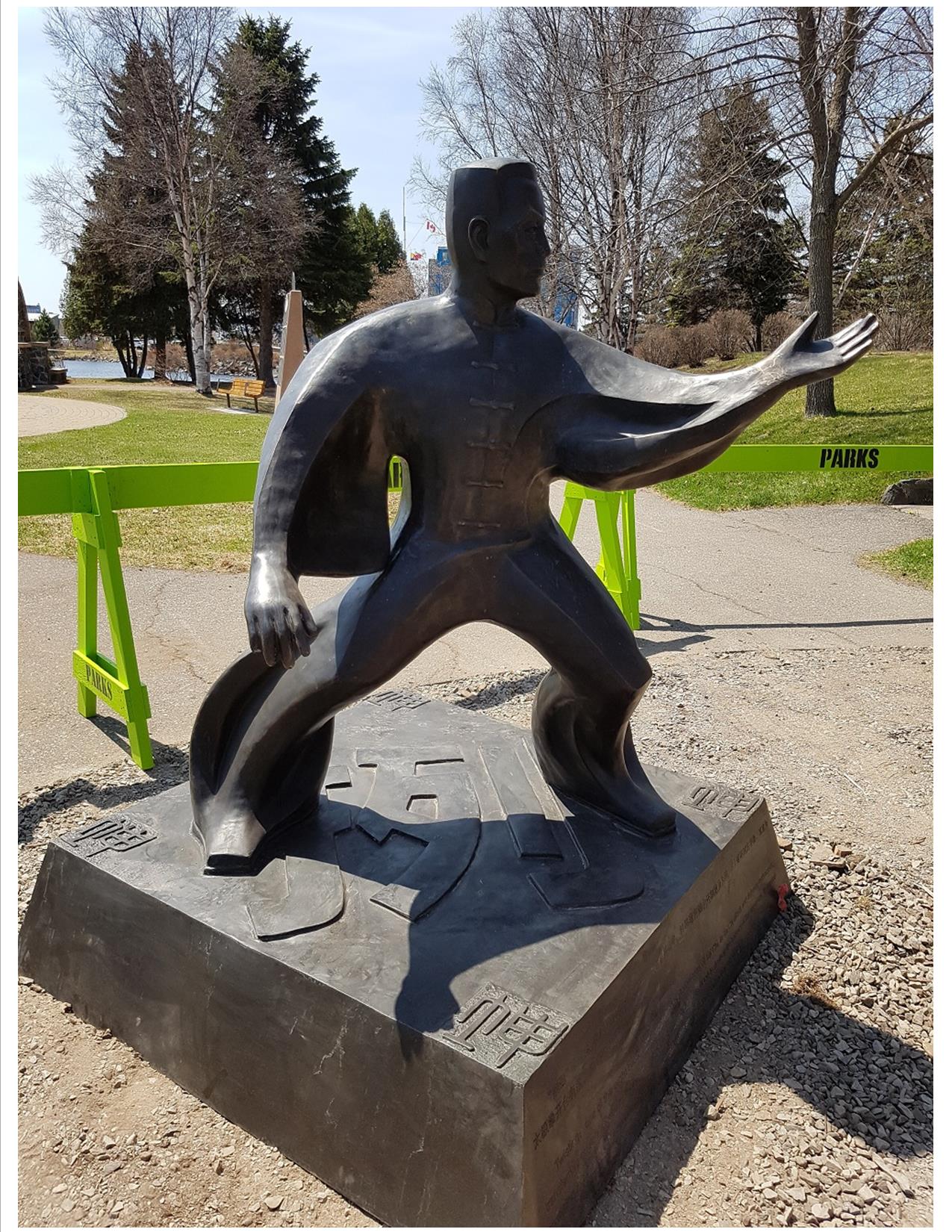 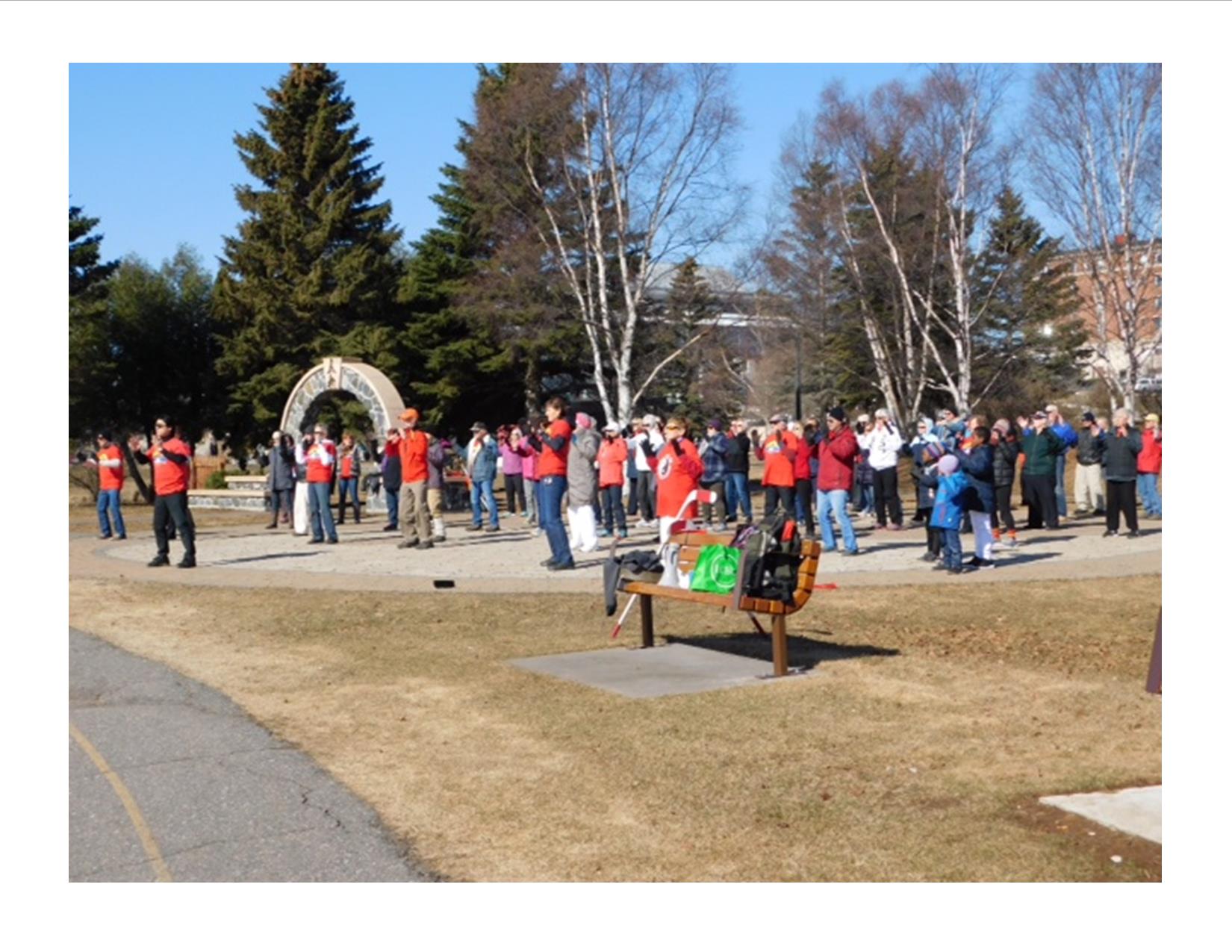 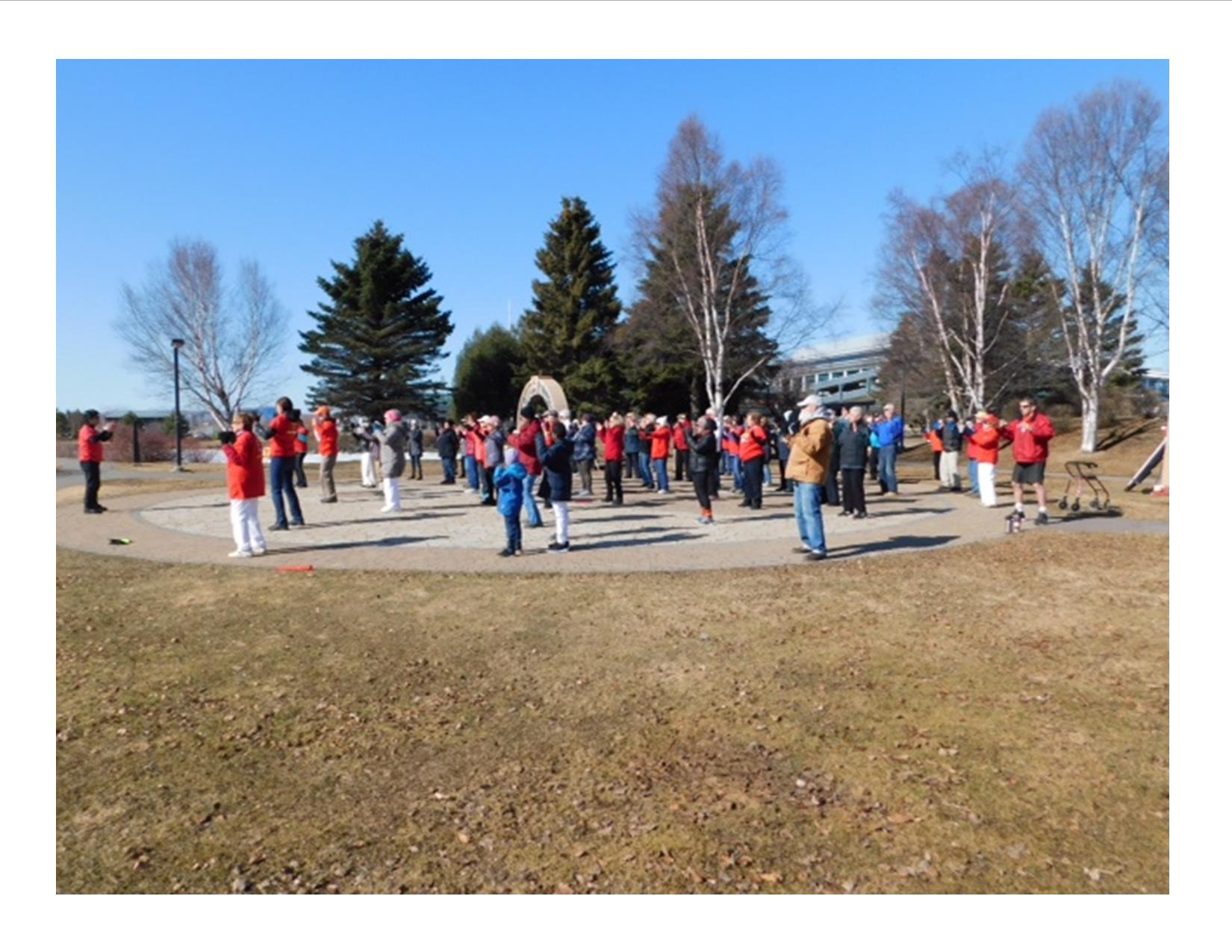 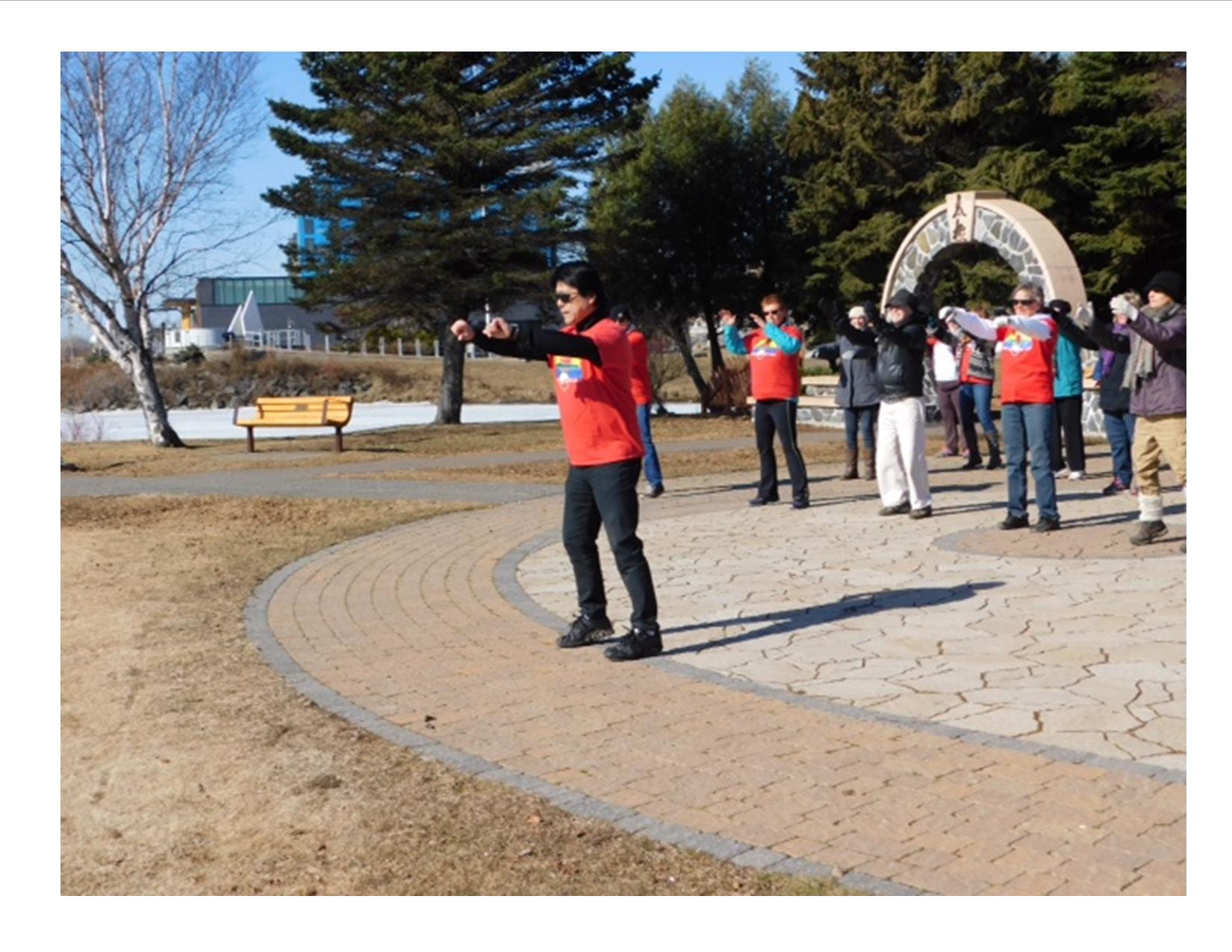 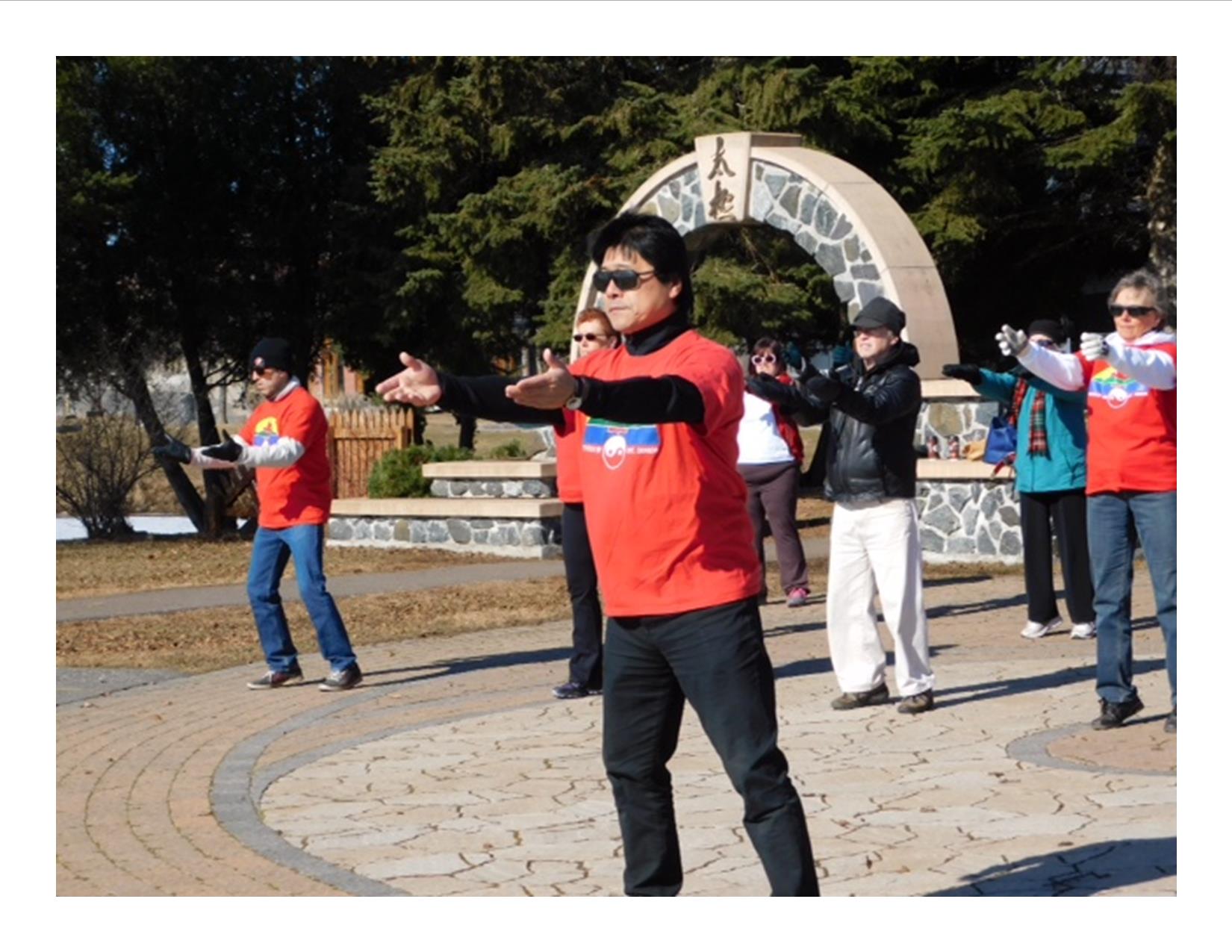 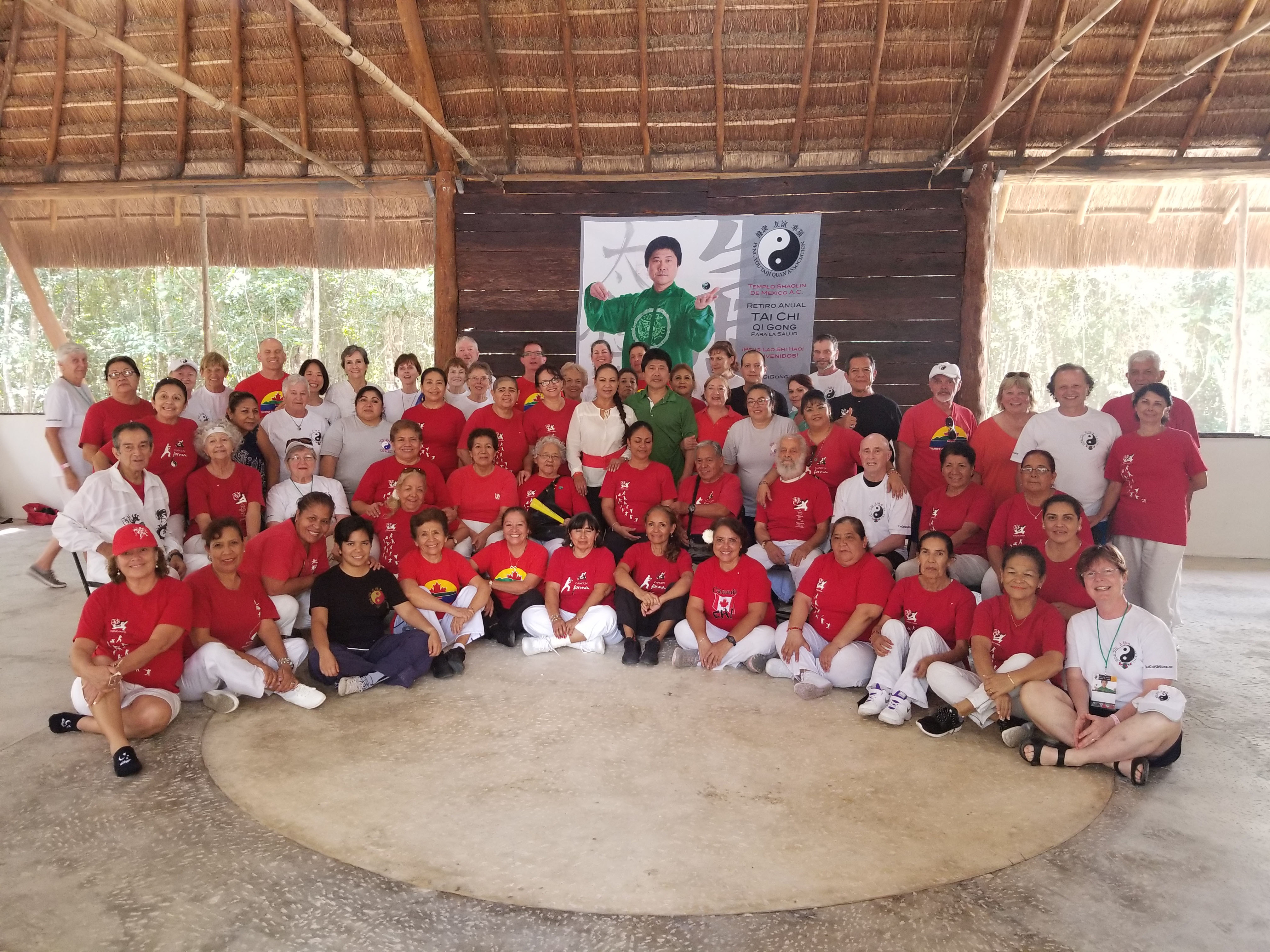 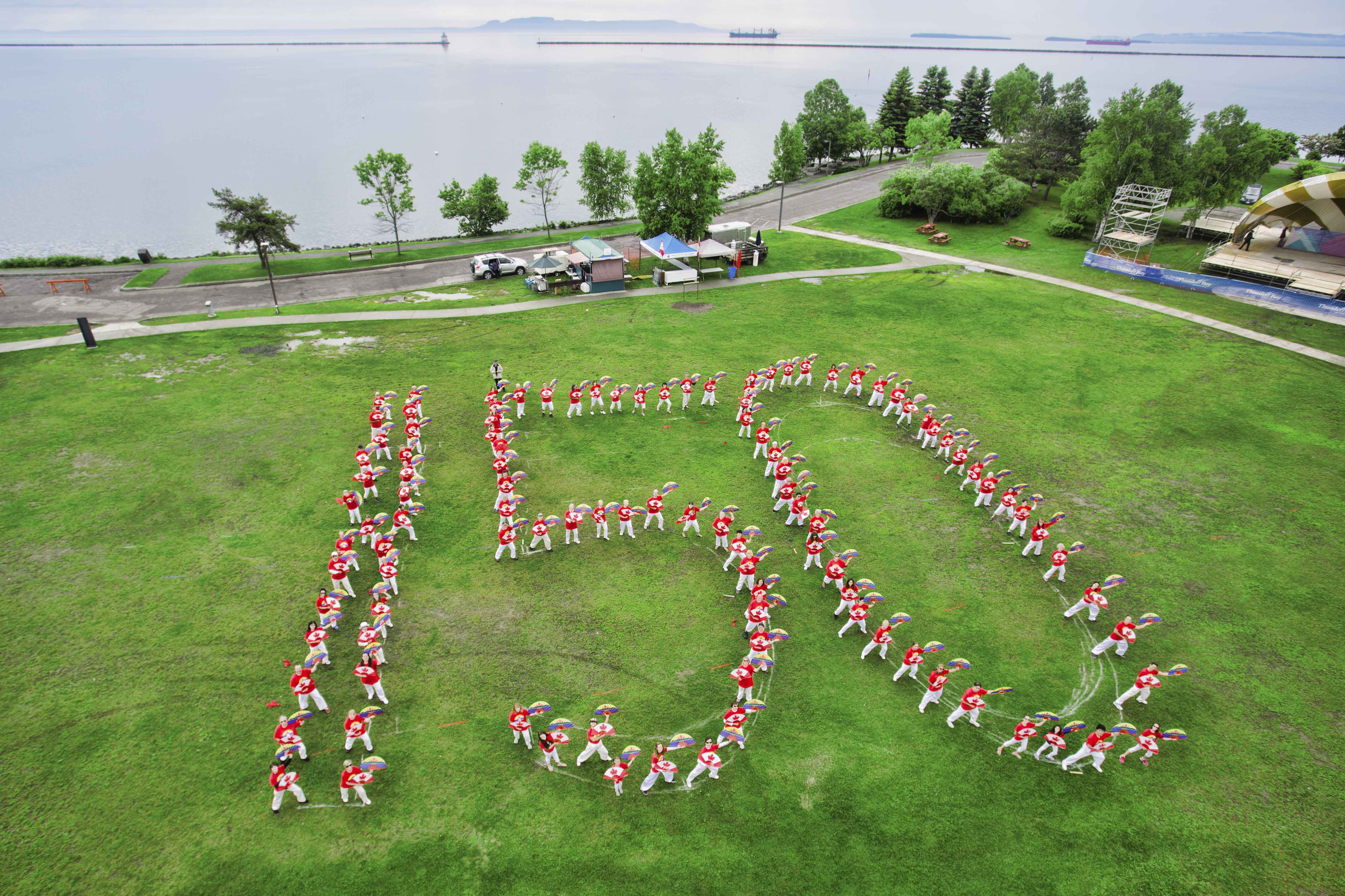 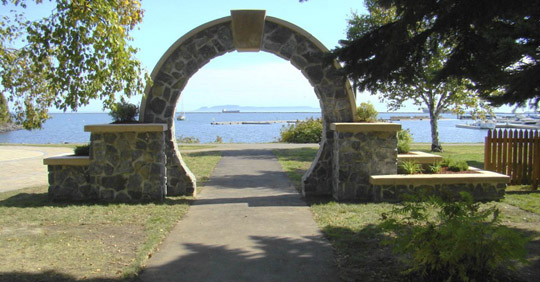